ARTICLES & LINKS Two Ways to Mitigate Conflict Before it Starts

Two Ways to Mitigate Conflict Before it Starts 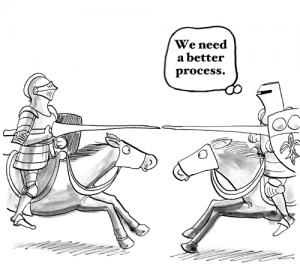 You either bite your tongue in the hopes of avoiding conflict or you lose your grip on your emotions. Neither method seems to be serving your workplace interactions – or your career advancement.

How can you change your approach to conflict so you’re not feeling like a doormat, or worse, a bully?

Try learning some basic conflict mitigation and resolution techniques. Here are the first two techniques we recommend for mitigating conflict before it starts:

1. Understand the Difference Between Aggression and Assertiveness

Picture an aggressive dog. When you walk by his home, he runs out and barks. He doesn’t recognize friend or foe. He sees a potential intruder in any person who passes by his home. Therefore, he seeks to defend himself against everyone. His guard is up at all times.

Aggression operates similarly in humans. An aggressive person views their environment defensively. They feel the need to protect themselves against harm, which they see everywhere – from water cooler conversations to their morning commute.

This hostile attitude keeps them on edge, causing them to have outbursts in the workplace and to engage in highly personal, negative criticism about other team members. Their behavior ultimately causes harm to themselves and to other people in their organization.

Aggressive communication is primarily combative, selfish, and potentially abusive. It is very different from assertive communication, a tactic in which the communicator directly explains their boundaries and their needs.

Assertive communication is a core tool in conflict mitigation. It requires you, as the communicator, to be straightforward in outlining your goals. At the same time, you also need to consider the other party’s goals. This unique combination of self-esteem and empathy empowers you and demonstrates your trustworthiness to the other party.

Assertiveness boils down to respectively standing your ground while remaining open to comments and feedback from others.

How many times have you walked into a performance review and been excited? Likely never. That’s because it’s challenging for almost everyone to hear that they aren’t meeting their full potential. Most people take that constructive criticism personally. They interpret their supervisor’s feedback as a direct, verbal assault on their character and their merit as a human being.

Nothing could be farther from the truth. With rare exception, the feedback you receive in the workplace isn’t personal. It’s about how you do your job. It doesn’t diminish or demean you as a person. Feedback is supposed to highlight areas of improvement and help you become a more skilled professional in your field.

The next time you receive constructive criticism, take a long pause. Allow the immediate emotions you feel to pass. Don’t get mad at yourself for experiencing them. Even professionals with very thick skin have some undercurrent of emotion during feedback.

Maintain a calm front. Don’t get defensive, upset, or sad. Continue to actively listen. Remind yourself that the other party involved, namely a fellow team member or your supervisor, is trying to communicate something that’ll ultimately make you better at your job.

Remove your personal feelings about the other party from the equation. It doesn’t matter if the person giving you constructive feedback is someone you greatly dislike, or is someone you consider a close friend. The information they are providing should be taken seriously and objectively, even if they don’t communicate it well.

It’s a good idea to start with the assumption that you have something to learn. None of us is perfect, so going into the meeting with the idea that you’ll come out with helpful information that will make you a better team member can help set a positive tone and make the meeting more productive.

As you listen, tease out the information that is most helpful to you. The quality of feedback varies greatly. Sometimes you’re hearing something you already know. Sometimes you’re hearing something that takes you by surprise. Other times it’s hard to know how much to absorb versus let go. Use your judgement to determine which tidbits of information are helpful to improving your performance. If the other party is telling you something you didn’t know, calmly explain that this criticism surprised you. Then, ask for specific incidents or evidence that clearly demonstrates the position they’re taking.

What if you do get angry, cry, or feel defensive? Politely interrupt the other party, communicate that you’re experiencing some strong emotions about this feedback and ask to reschedule. It’s important to regain control of the circumstances and to let the other party know you still want to hear their constructive criticism. Make sure you follow up with them once you’ve calmed down, then set the second meeting.

Learn How to Communicate Assertively and Resolve Conflicts with PMC Training

Don’t waste time trying to avoid conflict or risk your career getting into unnecessary conflict. Learn how to navigate workplace tensions, disagreements, and interactions. Learn the ins and outs of conflict mitigation and empower yourself to be a more direct communicator. To get started, sign up for PMC Training’s Assertiveness and Conflict Resolution course.  Also available as an online course – live with instructor.

This two-day workshop will teach you how to communicate assertively, how to interpret criticism objectively instead of personally, and how to manage conflict in the workplace. Use our online registration to sign up today!

“A lot of good tools. Facilitator was awesome. Knowledgeable and engaging.” – Sylvie Bissonnette